Unison Branch Office and Stewards are being approached by a significant number of members regarding the current situation with ER / VR. Your Unison corporate reps will continue to update members through the branch when information is received. If members have any specific queries regarding their application in the first instance they should approach their manager / HR. However you can contact your Corporate Reps via Branch Office if you have further questions.

Coventry City Council is currently considering ceasing being a direct provider of care and support to citizens. A report posted on their website on 9th September (page 24) reveals the council is undertaking work to “understand the costs and benefits” of ceasing to provide a number of services. These services include

The authority expect this move will reduce the overall cost of social care but could see the loss of in excess of 500 jobs from the council not including the knock on effect on support services to these areas.

UNISON Coventry District Branch, whose motto is “for public service not private profit” is concerned about the impact of these forthcoming decisions upon their members their jobs and the quality services they provide to the most vulnerable in the city. Consistently the impact of local authority budget cuts falls upon the most vulnerable in our communities and those on the lowest pay. The report also highlights the vital role libraries are to play as part of the social care support provision in the city in delivering information and advice, yet this week it was revealed that Libraries also face closure.

“citizens of Coventry need to be aware of the discussions currently taking place within the city council that will have a drastic impact on the services they rely on. Our members’ jobs aren’t the only things at risk when services are run for profit or cease to run at all. It is of particular concern that yet again low paid female workers are likely to bear the brunt of the local authorities drive to balance the budget.”

The report can be found via the following link

How your pay is affected. What you will take home – all for your info. Comments welcome. Click here – PAY PROPOSAL BRIEF the facts 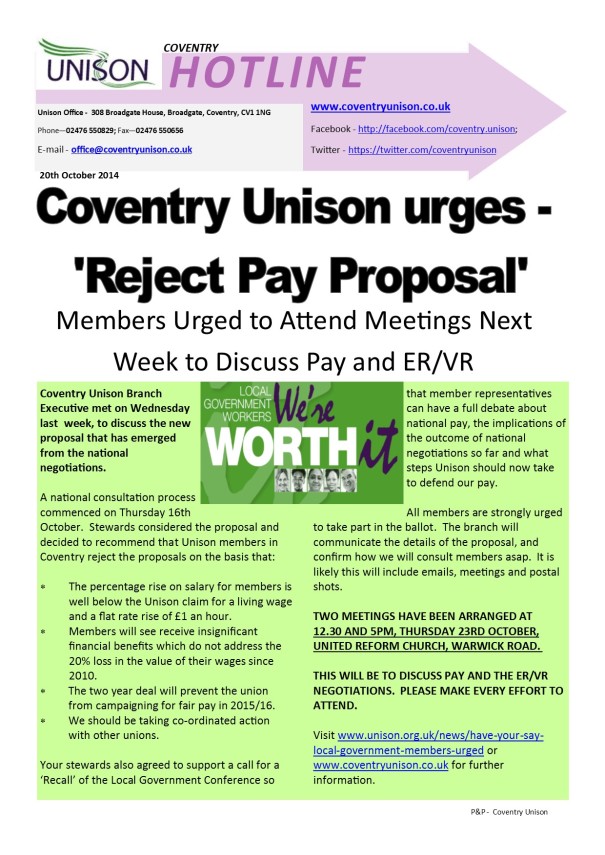 Coventry Unison Branch Executive met on Wednesday last week, to discuss the new proposal that has emerged from the national negotiations.

A national consultation process commenced on Thursday 16th October.  Stewards considered the proposal and decided to recommend that Unison members in Coventry reject the proposals on the basis that:

* The percentage rise on salary for members is well below the Unison claim for a living wage and a flat rate rise of £1 an hour.

* Members will see receive insignificant financial benefits which do not address the 20% loss in the value of their wages since 2010.

* The two year deal will prevent the union from campaigning for fair pay in 2015/16.

* We should be taking co-ordinated action with other unions.

Your stewards also agreed to support a call for a ‘Recall’ of the Local Government Conference so that member representatives can have a full debate about national pay, the implications of the outcome of national negotiations so far and what steps Unison should now take to defend our pay.

All members are strongly urged to take part in the ballot.  The branch will communicate the details of the proposal, and confirm how we will consult members asap.  It is likely this will include emails, meetings and postal shots.

Two meetings have been arranged at:

12.30 and 5pm, Thursday 23rd October, United Reform Church, Warwick Road.  This will be to discuss pay and the ER/VR negotiations.  Please make every effort to attend.

UNISON would like to update you regarding our current position on ER/VR and to clarify the reasons for the representations we have made to management, and HR.
It has been our branch priority, set at our members meetings of the 10th September, to ensure that the consultation was a meaningful one and that as part of the process we would fully understand the impact of each redundancy upon the remaining workforce and the services in which they work.

UNISON’s position is supported in employment law (TULCRA1992) and we have a responsibility to ensure that, if the workforce is to be reduced, we do everything we can to support our members, both those who wish to take vr and those who wish to remain in employment. Our view is that as we enter a period of immense change in the workplace, not just limited to er/vr 4, we support our members by ensuring management comply with the law and the authority’s policies and procedures.

Following a number of discussions UNISON is satisfied that management are now prepared to engage meaningfully with us in the process. We are awaiting confirmation that management will facilitate further members meetings for UNISONs members in the coming week. 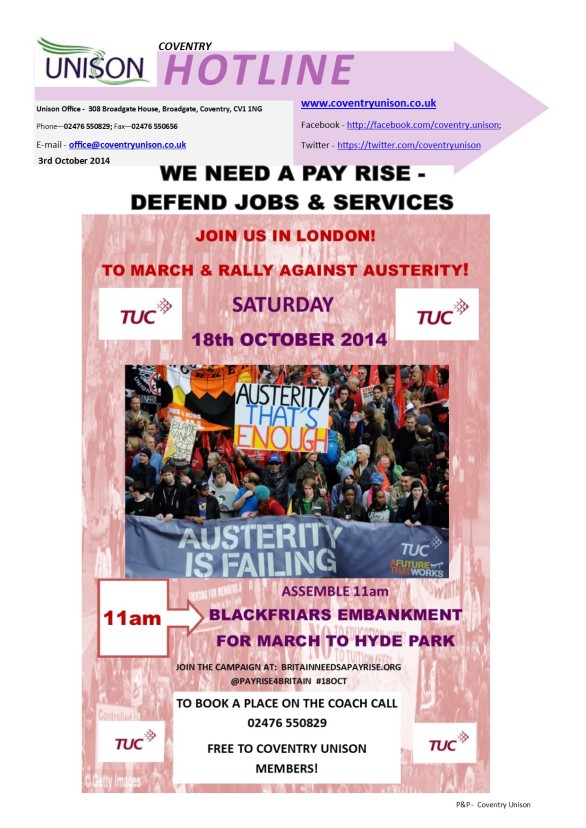 You may have heard about or seen communications from UNISON and other trade unions over recent days regarding the current pay dispute. A proposal has been discussed but no formal offer has been made.

Coventry Unison agrees that the messages currently coming out from various sources appear to be contradictory and confusing which is why we want to update you of where we stand.

Where are the pay negotiations at the moment?

At this point, there is no firm offer as the LGA has not put the proposal to Councils. Therefore, as it stands, UNISON nationally is not in a position to consult members until a firm offer is made in writing that the employer has signed up to.

At a recent regional briefing, UNISON branches were informed that our sister unions may have a slightly different position to ourselves, however, we have a firm conference policy that says we cannot consult our members until we have a firm offer in writing. A proposal does not constitute an offer.

Is this proposal a better offer than the 1%?

At present this is only a proposal. However, there are a couple of things you need to bear in mind:

 The proposed 2.2% on basic pay from 1 January 2015 is low and does nothing to compensate for years of pay cuts.

UNISON members in local government have faced year upon year of pay cuts which needs to be addressed.

 Jobs losses and service cuts will mean more work for those left behind. Your pay needs to reflect the skilled work you do.

 Your pay has a direct affect on your pension which means negotiating a fair pay rise will have longer term implications on your finances.

UNISON believes there is sufficient money for a decent pay rise. Billions in council surpluses would meet a fair rise on their own.

So what happens now?

We are waiting for a firm offer to be received from the Local Government association (LGA).

*UNISON nationally will continue to build for the industrial action planned for 14 October.

At this point the strike will go ahead.

We will keep you informed of developments as soon as we have them.